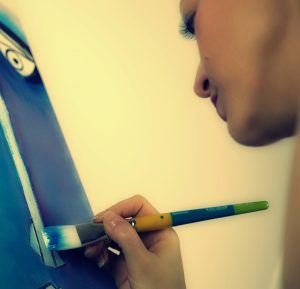 Melania Adony, is the artistic name of a woman who chose the calm retreat in front of the profane avalanche, taking a personal opening from the inside to the outside world. There is calm and balance in every beginning and end of composition, the mirror of an artist who loves humans before having it in front of her compositions.

Melania Adony defines herself as a life-learning pupil, a self-righteous woman full of balanced perseverance, excesses being eliminated as a natural answer to the understanding of those obvious details of the profane, and the frequent immersion in the sacred worlds bringing the certainty of a truth overlooked by society.

The Art of Melanie is the starting point of the flow of a river, a point that finds its balance in the ending point of the same river, that outpouring into a great sea of thoughts that settle unceasingly. Just as a drop of rain, every detail finds its equivalent in the environment of human intellect and sensation.

A permanent reflection on primordial creation, divine fragments, are shared on any work bearing the name of the artist. Often, the point of balance of the composition is at the very beginning of the blade.

The canvas speaks constantly with the viewer, there is a dialogue cultivated by Melania, in every ink, symbol, line and point embedded in the text of the canvas. Melanie’s canvas are talking by themselves. Each composition in part has the narrative thread of thoughts that link a story. The paintings communicate at a higher level with the human soul, inviting to real opening, soul and mind, an incitement to returning and introspection.